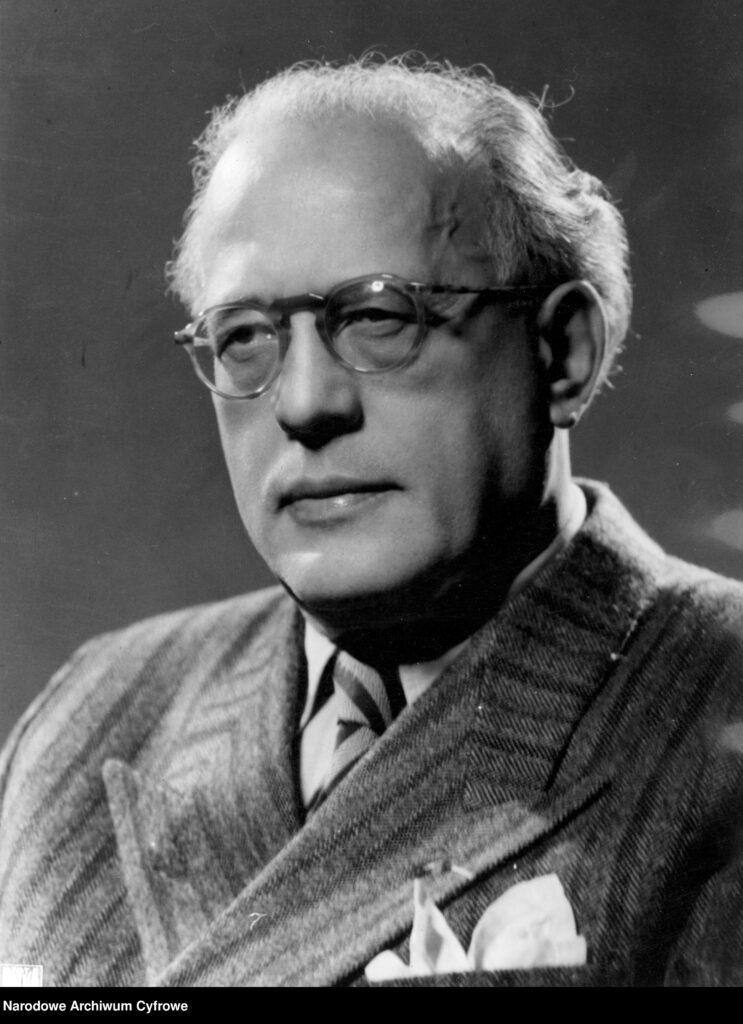 Grzegorz Fitelberg (born on 18 October 1879 in Daugavpils) goes down in the history of Polish music as an excellent violinist, an outstanding composer, and most of all as a brilliant conductor. He had special merits for promoting contemporary music and introducing the latest pieces of music in the repertoire of orchestras in Poland and all over the world. Owing to his mastery of conducting, Fitelberg was often compared to Gustav Mahler, and his persistence and consistency in choosing his repertoire aroused both delight and controversy, keeping him in memory as an incredibly expressive and uncompromising character.

Grzegorz Fitelberg’s talent revealed itself very early. When the artist was only 12 years old, his parents sent him to Warsaw to study in the Institute of Music. At the time, he demonstrated special abilities in several fields, which allowed him to be accepted in the violin class with Stanisław Barcewicz, but also in the class of theory and composition, where he studied under the supervision of Gustaw Roguski, and subsequently Zygmunt Noskowski. After graduation from the Conservatory, having obtained two diplomas (in Violin and Composition), he started work in the orchestra of the Grand Theatre in Warsaw. Then, in 1901 he was appointed a concertmaster of the second violin section in the newly established Warsaw Philharmonic.

His composing pursued at the same time was gradually being appreciated in numerous competitions. In 1898 he won the 1st prize in the I.J. Paderewski Composition Competition in Leipzig for his Sonata in A-minor for violin and piano he had composed at the age of 15, while still at college. Another success was his triumph in a competition held in Warsaw by Count Maurycy Zamojski in 1901. These awards were a driving force for him to write more music, which was appreciated by audiences and critics alike during concerts held in Poland and abroad.

Grzegorz Fitelberg’s debut as a conductor was the premiere of his Symphony No. 1 (1904/1905 season of the Warsaw Philharmonic). And although this performance was reviewed focusing on the composition rather than his conducting skills, it became a spark of Fitelberg’s new love – the conductor’s podium proved to be more attractive to him than the music stand of an orchestra musician.

The path of the conducting baton he entered in Warsaw led him to Berlin, where he met Karol Szymanowski – a composer who was to become one of his closest friends and who entrusted premieres of most of his works to him. It was also in Berlin where the Young Polish Composers’ Publishing Company was established in 1905 (later: Young Poland), created thanks to the support of Prince Władysław Lubomirski by Grzegorz Fitelberg and Ludomir Różycki together with Karol Szymanowski, Apolinary Szeluto, and Mieczysław Karłowicz. And even though Young Poland prevailed only until 1912, the music deriving from this group was featured in programmes prepared by Grzegorz Fitelberg and played with orchestras all over the world on a permanent basis.

When Grzegorz Fitelberg was entrusted the task of creating a programme of a concert or a season, it was sure to be dominated by contemporary music. The latest compositions enjoyed a special place in the life of this artist, who wished to popularise and promote living composers. Hence his repertoire often comprised works by members of Young Poland (including aforementioned numerous compositions by Karol Szymanowski and his own), as well as pieces by Igor Stravinsky, Béla Bartók, and Sergei Rachmaninoff.

In 1906-1953 Grzegorz Fitelberg gave 189 concerts abroad with contemporary Polish music. He conducted premiers of such oeuvres as “Eternal Songs” op. 10 by Mieczysław Karłowicz, Symphony No. 1, Symphonic Variations, or “Silesian Triptych” by Witold Lutosławski, Violin Concerto No. 1 and Concerto for String Orchestra by Grażyna Bacewicz, as well as most compositions by Karol Szymanowski, including “Stabat Mater”, a concert performance of the ballet “Harnasie”, Violin Concerto No. 2, and Symphonies Nos. 1, 5, and 2, dedicated to the conductor. He conducted the premiere of “Mavra” by Igor Stravinsky in Paris, he also toured South America with the ensemble of Compagnie des Opéras Russes.

His work brought him numerous awards and distinctions. In 1927 he became the Knight of the Order of Polonia Restituta and Corona d’Italia. In 1937 Fitelberg and the Symphony Orchestra of the Polish Radio he conducted were granted Golden Medals at a competition of European orchestras and conductors organised to commemorate the International Exposition in Paris. In 1947 he was honoured with the Commander’s Cross of the Order Polonia Restituta with Star and an award of Polskie Wydawnictwo Muzyczne for conducting contemporary Polish music. Together with the Grand Symphony Orchestra of the Polish Radio he received the National Artistic Award of the 2nd Degree (1950) and of the 1st Degree (1951).

The Grand Symphony Orchestra of the Polish Radio under the baton of Grzegorz Fitelberg played the first concert for a real audience on 23 September 1947 in the concert hall of the Silesian Philharmonic. That occasion marked the beginning of its regular concerts in that venue – twice a month, with one of the concerts broadcast by radio stations in Poland and abroad. The concert hall of the Silesian Philharmonic is the very place where the premiere of the aforementioned Symphony No. 1 by Witold Lutosławski was held on 1 April 1948.

Grzegorz Fitelberg died on 10 June 1953 in Katowice. The last concert under his baton took place on 26 May 1953 in the concert hall of the Silesian Philharmonic, an institution which was bound with the figure of this acclaimed conductor in a special way, since 1953 operating under the supervision of his student, the only one he had ever prepared to the diploma, Karol Stryja. It was him who in 1979, on his maestro’s 100th birthday, organised the first Grzegorz Fitelberg International Competition for Conductors.  Nowadays, this event is one of the most important performance competitions in Poland, belonging to the World Federation of International Music Competitions in Geneva since 1982.

You can find out more about which cookies we are using or switch them off in settings.

Epilepsy Safe Mode
Dampens color and removes blinks
This mode enables people with epilepsy to use the website safely by eliminating the risk of seizures that result from flashing or blinking animations and risky color combinations.
Visually Impaired Mode
Improves website's visuals
This mode adjusts the website for the convenience of users with visual impairments such as Degrading Eyesight, Tunnel Vision, Cataract, Glaucoma, and others.
Cognitive Disability Mode
Helps to focus on specific content
This mode provides different assistive options to help users with cognitive impairments such as Dyslexia, Autism, CVA, and others, to focus on the essential elements of the website more easily.
ADHD Friendly Mode
Reduces distractions and improve focus
This mode helps users with ADHD and Neurodevelopmental disorders to read, browse, and focus on the main website elements more easily while significantly reducing distractions.
Blindness Mode
Allows using the site with your screen-reader
This mode configures the website to be compatible with screen-readers such as JAWS, NVDA, VoiceOver, and TalkBack. A screen-reader is software for blind users that is installed on a computer and smartphone, and websites must be compatible with it.

We firmly believe that the internet should be available and accessible to anyone, and are committed to providing a website that is accessible to the widest possible audience, regardless of circumstance and ability.

To fulfill this, we aim to adhere as strictly as possible to the World Wide Web Consortium’s (W3C) Web Content Accessibility Guidelines 2.1 (WCAG 2.1) at the AA level. These guidelines explain how to make web content accessible to people with a wide array of disabilities. Complying with those guidelines helps us ensure that the website is accessible to all people: blind people, people with motor impairments, visual impairment, cognitive disabilities, and more.

This website utilizes various technologies that are meant to make it as accessible as possible at all times. We utilize an accessibility interface that allows persons with specific disabilities to adjust the website’s UI (user interface) and design it to their personal needs.

Additionally, the website utilizes an AI-based application that runs in the background and optimizes its accessibility level constantly. This application remediates the website’s HTML, adapts Its functionality and behavior for screen-readers used by the blind users, and for keyboard functions used by individuals with motor impairments.

If you’ve found a malfunction or have ideas for improvement, we’ll be happy to hear from you. You can reach out to the website’s operators by using the following email

Our website implements the ARIA attributes (Accessible Rich Internet Applications) technique, alongside various different behavioral changes, to ensure blind users visiting with screen-readers are able to read, comprehend, and enjoy the website’s functions. As soon as a user with a screen-reader enters your site, they immediately receive a prompt to enter the Screen-Reader Profile so they can browse and operate your site effectively. Here’s how our website covers some of the most important screen-reader requirements, alongside console screenshots of code examples:

We aim to support the widest array of browsers and assistive technologies as possible, so our users can choose the best fitting tools for them, with as few limitations as possible. Therefore, we have worked very hard to be able to support all major systems that comprise over 95% of the user market share including Google Chrome, Mozilla Firefox, Apple Safari, Opera and Microsoft Edge, JAWS and NVDA (screen readers), both for Windows and for MAC users.

Despite our very best efforts to allow anybody to adjust the website to their needs, there may still be pages or sections that are not fully accessible, are in the process of becoming accessible, or are lacking an adequate technological solution to make them accessible. Still, we are continually improving our accessibility, adding, updating and improving its options and features, and developing and adopting new technologies. All this is meant to reach the optimal level of accessibility, following technological advancements. For any assistance, please reach out to

This website uses cookies so that we can provide you with the best user experience possible. Cookie information is stored in your browser and performs functions such as recognising you when you return to our website and helping our team to understand which sections of the website you find most interesting and useful.

Strictly Necessary Cookie should be enabled at all times so that we can save your preferences for cookie settings.

If you disable this cookie, we will not be able to save your preferences. This means that every time you visit this website you will need to enable or disable cookies again.

This website uses Google Analytics to collect anonymous information such as the number of visitors to the site, and the most popular pages.

Please enable Strictly Necessary Cookies first so that we can save your preferences!

Please enable Strictly Necessary Cookies first so that we can save your preferences!